Heating Up!: Wearable Device Designer – SCOPES Digital Fabrication
Website under construction: If you experience difficulties, please use the "Feedback" tool on the left side of each page.
English
العربية简体中文NederlandsEnglishFrançaisDeutschItalianoPortuguêsРусскийEspañol Aidan Mullaney
Other
Aidan Mullaney is the Instructional Manager for the GE/Celtics Brilliant Play Lab. His primary role with the Fab Foundation is developing and delivering curriculum for the middle school mobile lab. Aidan facilitates career-related activities with a focus on STEM in… Read More

Students are challenged to both program an Arduino and engineer a circuit to measure a player’s temperature. In pairs, students will practice both computer and electrical engineering. Groups will simulate their circuits using TinkerCAD before manually connecting electronics and uploading their code. The device should accurately read temperature and attach to its wearer. This real world challenge also introduces students to a career in wearable technology.

This lesson is structured in a modified 5E lesson plan. Instructions for using the 5E model in this lesson are detailed on the last page of this document. The first three E’s (Engage, Explore, Explain) will focus on step-by-step instruction for using the Arduino and TinkerCAD code. The last two E’s (Elaborate & Evaluate) allow students to individualize their learning experience.

Arduino UNO Rev 3 (one per group)

Ardunio Components (one per group)

Instructors will introduce the class to Arduino and TinkerCAD. Students will first learn to power an LED after which they will program the LED to blink.

This project uses an Arduino to configure and code a prototype wearable device. To create a wearable temperature sensor, we first need to learn the basics of Arduino.

What is an Arduino?:

“Arduino is an open-source electronics platform based on easy-to-use hardware and software. It’s intended for anyone making interactive projects.” It is comprised primarily of two parts: a physical microcontroller (board) and computer-based IDE (integrated development environment).

Using the Arduino: Power an LED

Divide students into pairs. Inform them that one student will serve as the “Electrical Engineer” the other will be the “Computer Engineer”. Throughout the lesson, these roles may interchange. Their first task as a team is to turn on an LED using a set of materials. They are also tasked with confirming their electrical configuration will power the LED using TinkerCAD Circuits.

Challenge: Use the Arduino to power an LED 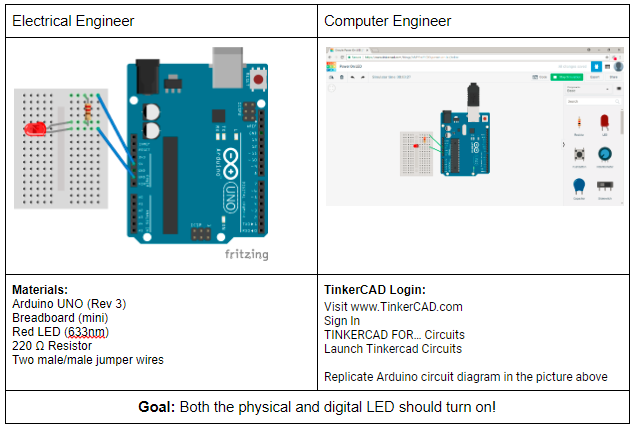 Student’s next task as a team is to program an LED to blink. They should continue to configure the physical circuit with the Arduino and confirm the configuration with TinkerCAD Circuits.

Challenge: Program an LED to blink using the Arduino 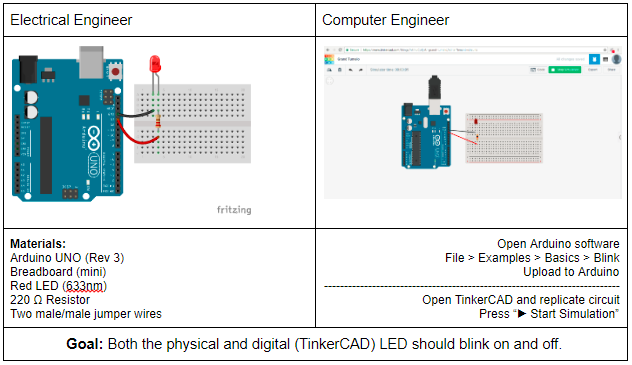 Explain how a (mini) breadboard functions: Rows of pins (holes) are connected by conductive metal strips and allow current to flow freely while remaining separate from adjacent pin columns.

pinMode(“pin, “mode”) establishes a pin and mode: modes can be OUTPUT or INPUT

digitalWrite(“pin”, “value”) sets pins to a value: HIGH for on, LOW for off

delay(“ms”) wait for a set amount of milliseconds

Comments (noted as “//”) notate the code within the file. Comments are not read by the computer but are instead helpful reminders about the code. In TinkerCAD, it’s “Notation”.

Instructors will guide the students through their first attempts in writing code through TinkerCAD's block code editor. Instructors will teach students how to read digital information using sensors and discuss the differences between sensors and actuators. Students will explore writing code to program the Arduino. They will change variables and select lines of code to understand the commands they program. 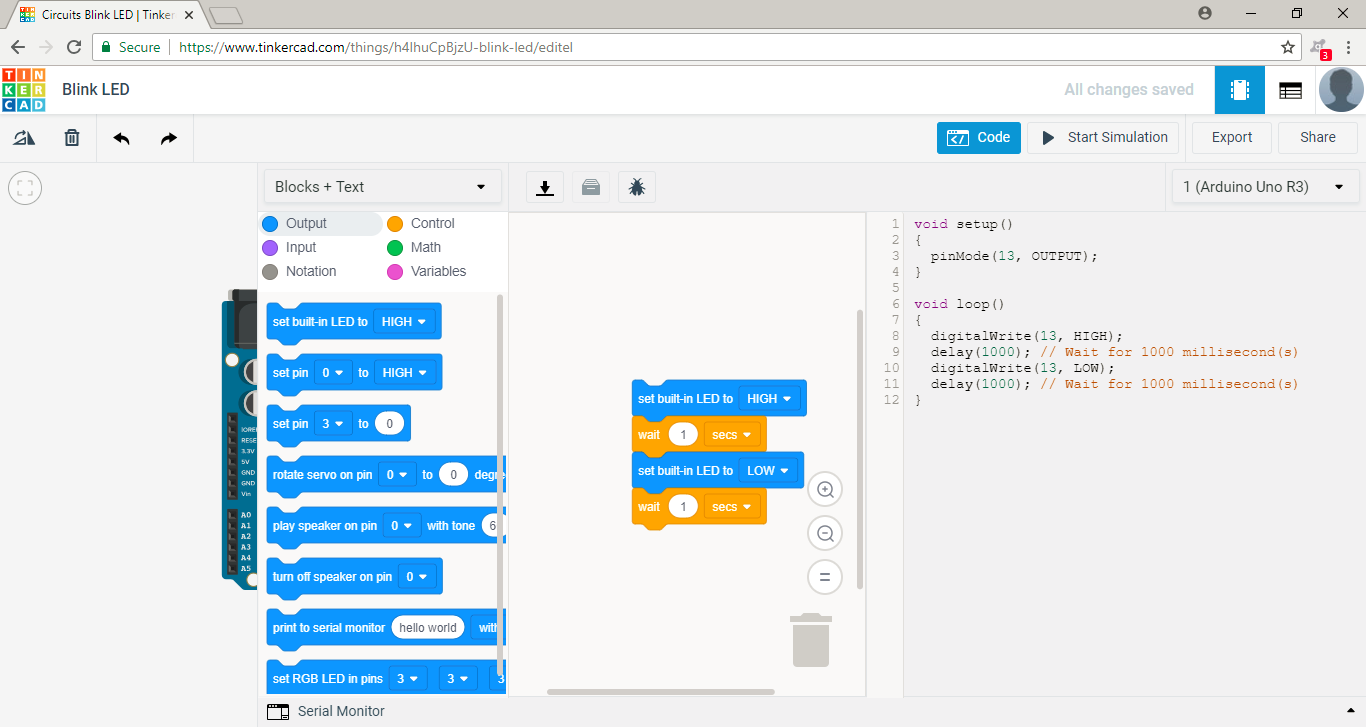 Open TinkerCAD Circuits and select the Code button to bring up the display pictured above. Use the dropdown menu to select Blocks + Text. Students can view the blocks and how it writes the real Arduino code by adding to the work plane. Both engineers will practice coding together.

Challenge: Read digital information from the Arduino by pressing a pushbutton switch.

The Arduino board is a microcontroller. These devices take in and send out information. More specifically, “microcontrollers listen to sensors and talk to actuators”. Students have now explored both an actuator (LED) and sensor (pushbutton switch). Additional examples of each are as follows:

Challenge: Read analog information from the Arduino by using a potentiometer.

Serial.begin(9600) – talk between computer and Arduino at the standard 9600 bits/second

Serial.println() – prints data defined within the () on a new line in the Serial Monitor

Digital: information existing on a limited range usually in two states, Ex. 0 to 1.

Arduino has a built-in Analog to Digital converter. In the previous challenge, it converted analog voltage information (0-5V with an infinite range of values in between) to a number 0-1023.

Potentiometers are essentially resistors. Twisting the knob varies the resistance by “changing the ratio of the voltage between the middle pin and power.” They are similar to light dimmers.

Challenge: Program an LED to blink using input from a potentiometer

Instructors will show students an an application of the final product (if they have not already done so). Instructor will guide students through the more challenging lines of code and electrical setup. Students will apply their knowledge of Arduino electronics and programming to create a Temperature Sensor that accurately tracks the surrounding environment.

Introduce students to the final challenge by showing them the following video describing build and use of a temperature sensor for safely shoveling snow in cold weather:

Challenge: Construct a prototype wearable device that can track a player’s temperature data.

Students can begin to redesign their temperature sensor by making it more of a wearable device. The following technologies could help improve these Arduino coded devices:

Changing lines of the code to read in new information and write or present different data could improve the overall experience with the device. One example might be to add several LEDs and create a light meter wherein more LEDs light up the greater the temperature.

The addition of extension wires, solder connections, header pin connecting cables, battery adaptors, and any other devices could increase the device’s portability, accessibility, and comfort.

Custom designed patches could apply the sensor of the device to the wearer’s skin or clothing. These could allow for the sensor to securely and accurately measure temperature while the wearer performs various activities. Additionally, it could also add to the aesthetics of the device.

Crafting a housing unit using CAD software (like TinkerCAD) to compactly store the Arduino while using the device protects both the wearer and the Arduino.

Using the 5E Model of Instruction

Instructors should refer to this section of the document for each Arduino activity. The prompts will guide instructors in employing the 5E lesson model throughout the lesson.